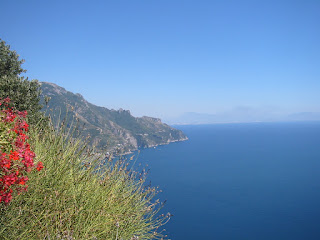 This is worth the airfare alone, I suddenly thought to myself.

It was almost ten o' clock at night and I was walking up the steep road that led to our apartment when a full moon threw its silver beam down the open sea and split the water into two. On one side lay the well-lit coast with its distant, diminutive houses and street lamps; the only sign of human presence. On the other side was the vastness of the sea, looking both inviting and threatening.

My first time in Italy was full of magic moments like this.

It'd been many years since I had seen a full moon lighting up the sea. It's funny how we often forget moments that we otherwise take for granted. I have lost count of how many times I sat on the seawall in my native Havana watching a full moon become a morning sun. 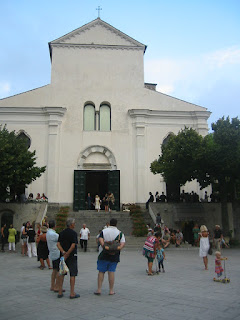 My introduction to Ravello, and Italy by default, had taken place a few days before that magic moment and it was full of surprises, too. We flew to Naples from Heathrow via Milan, one of the world's "fashion capitals". We'd already arranged a car hire in London and after picking up our motor we headed off to the Amalfi coast straight away.

As soon as we left the A3 motorway near Salerno we were blown straight away by the landscape. Perilous as it was, driving up the narrow, winding roads, we couldn't stop marvelling at the azure colour of the sea and the elegant gardens and villas.

If truth be told I must admit that on that first encounter I was more focused on the road than the greenery around us. I know it's not good to generalise but if that first experience was anything to judge by, my conclusion was at the time that Italian drivers were not very patient. Or at least many weren't. Being behind the wheel in a foreign territory to which I had just been introduced, I was being cautious and travelling at 20 or 30 kilometres per hour and as a consequence I'd acquired an unwanted and rather restless "tail". Well, you can imagine the chorus of horns being tooted in unison and the obscenities screamed at me in Italian, when my fellow drivers finally overtook me. Swearing that eluded me completely because I couldn't speak their language. 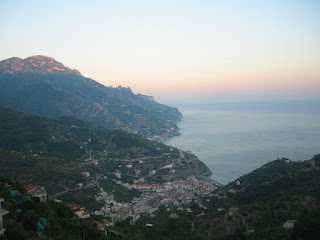 However the linguistic element became one of the salient aspects of my holidays. Readers and followers of this blog know about my passion for languages. So, how could I pass up the chance of learning a few words in a lexicon that is so close to my native Spanish? My wife bought a phrasebook before leaving London and every morning I made it my task to learn a few terms that I later on used with the locals. I hardly had any communication problems and when the need arose I defaulted to Spanish but with an Argentinian lilt. It's a well-known fact that many Italians migrated to the South American nation at the turn of the 20th century and Argentinian Spanish (as well as the Uruguayan variant) sounds a lot like Italian. Some words still threw me off, though. "Burro" in Italian translates as "butter", whereas to us, Spanish speakers, a "burro" is a "donkey". So in Hispanoamerica we ride it and in Italy they spread it on their toast. Bonkers. Languages are. 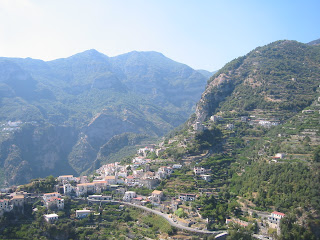 What led us to Italy was the wedding of my wife's niece. And what a beautiful affair it was! From the choice of the garden where the bride and groom exchanged vows, to the terrace where the reception was held, everything was carefully planned. The latter, especially, was an occasion to remember. We were up on the roof of a villa, overlooking the charming Amalfi coast on a cloudless, starry night. Just magical.

The wedding took place the day after we arrived which left us with plenty of time to busy ourselves with a daily programme of activities. We paid a visit to the aforementioned Amalfi coast and swam in one of its crowded beaches. We also went to Positano, a nearby picturesque town, to which we travelled by ferry. The journey only took us twenty-five minutes approximately and on the way there we were able to soak up the unbelievable coastal scenery from our boat. The rest of the time was divided between beach (including the less fashionable, but very enjoyable, Minori) and a visit to Villa Cimbrone, where, incidentally, I had the best pizza I've ever had in my life. In fact the food in general was pretty good, albeit quite salty at times for my taste. At night we wandered around the piazza in Ravello, which filled up quickly with the sounds of children playing.

It's not hard to see why the Amalfi coast and places like Ravello and Sorrento became the favourite hideways of celebrities such as DH Lawrence (apparently he wrote Lady Chatterley's Lover there), Sophia Loren and Jackie Kennedy (a photo of her hung prominently on one of the walls of a nearby hotel). It also goes some way to explain the exorbitant prices that seem to be the norm in the area. Plus the hard stares from some shop owners, waiters and waitresses who size you up and decide within one fraction of a second whether you have bottomless pockets or not. There are ways, however, of having a good time without having to break the bank. Use buses and boats, instead of taxis. Even if, like me, you're driving, it's better to take public transport in order to save money on car parking costs. Leave your motor for longer and more urgent journeys.

Whenever I think back on that full moon, on the turquoise of the water and the warm evenings in the piazza, I say to myself: Just those moments were worth the airfare alone. Magic Italy, I shall be back.

All photos taken by the blog author.

Next Post: "Killer Opening Songs", to be published on Wednesday 19th September at 11:59pm (GMT)