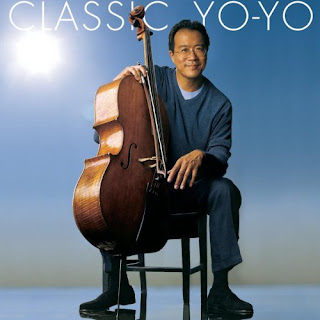 Good music is all about taking chances. Rock'n'roll colossi performing with symphonic orchestras, blues singers duetting with pop stars and salsa combos reworking soft rock ballads. That's exactly what Yo-Yo Ma did in his 2001 album, "Classic Yo-Yo": take chances. After all, it takes a brave, bold soul to go from Bach to Astor Piazzolla in less than a heartbeat. From the Killer Opening Song, Bach's Prélude from Unaccompanied Cello Suite to the coda, Appalachia Waltz, the record showcases Yo-Yo's wide range of styles.

Alison Krauss, Bobby Mc Ferrin and Itzhak Perlman are just some of the big names the Paris-born cellist enlists on this musical tour de force. His approach is unbiased and creative, which makes it easier for the average classically-oriented listener to access genres he or she might not have previously considered.

It's worth mentioning that the "classic" in the album title refers mainly to the style in which the pieces are played and the timelessness of many of them, not necessarily the genre to which they originally belong. A case in point is the Killer Opening Song, Bach's Prélude from Unaccompanied Cello Suite No. 1 in G Major, BWV 1007. This is not just a deep, haunting and beautiful melody that lingers in the air long after its two and a half minutes have expired. On "Classic Yo-Yo" it also evidences the simplicity that underscores the entire record. From the striking but uncomplicated album cover to the masterful arrangements, through the prélude Yo-Yo Ma manages to convey sophistication without resorting to complex formulas.

Bach's piece is the perfect opener because usually the suite's mellow arpeggios encourage musicians to travel a wide emotional range. Its short duration is a well-conceived ploy to leave the listener wanting more. Which on this occasion plays nicely into Yo-Yo's hands as the tracks that follow heighten the blurring between styles and sometimes even between the human voice and the cello (as heard on Vocalise, the duet with Bobby McFerrin). Interestingly, it is said that the cello is the instrument that most resembles the human male voice.

The key word that Killer Opening Songs would use to describe the whole record is "intriguing" as Yo-Yo Ma keeps the listener guessing. The opening solo is rich-sounding. His version of Piazzolla's Libertango is exotic and fierce. Gershwin's Prélude swings and sways as befits a timeless number. Finally, Alison Krauss' contribution is deep and soulful. And the name of the track on which she guests? Simple Gifts. As K.O.S. mentioned before, the best things in life sometimes are the simplest ones.

Next Post: “Sunday Mornings: Coffee, Reflections and Music”, to be published on Sunday 20th May at 10am (GMT)