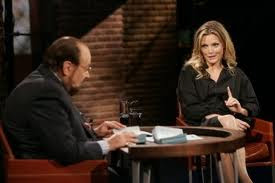 Recently I was watching a repeat of an Actors Studio episode on which Michelle Pfeiffer was being interviewed by the warm but enigmatic host James Lipton. When the time came for the Academy-nominated actress to take questions from the audience a young chap shot up his arm immediately in order to have his turn. However, he could barely get the words out of his mouth, so nervous and touched he was by the occasion. He looked embarrassed and so did Michelle. I was left wondering if it'd been easier for him to write his question to Ms Pfeiffer and get the show's host to read it. It also made me think about the relationship that some people establish with their favourite artists, whether they be authors, photographers, actors or directors.

Do fans idolise their objects of affection too much sometimes? And if so, where to draw the line?

The answer to the two questions above goes beyond this blog's virtual borders. At present there's an investigation going on into alleged illegal activities carried out by the tabloid press in the UK. What the Leveson inquiry has unearthed so far is business practices that owe more to the modus operandi of drugs cartels than to the fair and impartial behaviour we expect of our media.

And yet, whom are these hacks servicing? On whose behalf do they risk being found in a bin digging up the dirt (literally) of their "celebrity" targets? Response: readers. If everyone was as innocent as that young man on Actors Studio, whose only crime was to go all wobbly when he had the opportunity to interview his (probably) favourite actress, then the world wouldn't need vultures such as The Daily Mail, The Mail On Sunday, The Sun, The Daily Star and The Mirror with their never-ending thirst for tittle-tattle. Although the latter still manages to retain a modicum of decency. At least it was one of the few British papers that protested vehemently against the invasion of Iraq. But ultimately those who consume trash are also to blame for what the likes of JK Rowling and the McCanns have gone through. As the saying goes: "Eat s**t! A billion flies can't be wrong". And the more they eat, the more addicted they get to it.

Since the newspaper industry is, sadly, declining steadily, a lot of this dirty-laundry-in-the-open service is found online, where the playing field between public and celebrities has been levelled consistently in recent years. The internet, with its various platforms for personal expression such as blogs, social networking sites and web-based publications, has done a lot to knock down that wall of impenetrability that used to exist between "famous people" and the rest of us, mere mortals. Although, taking into account that anyone can gain notoriety these days with minimum effort, fame is no longer that hard to achieve. What stands out more, however, is that opening a magazine nowadays and being presented with a photo gallery of celebrities looking the worse for wear is no longer a rarity, but the yardstick by which modern journalistic standards are judged.

This change in attitudes is chiefly based, in my opinion, on the false assumption that some people have and whereby they believe that they own their favourite actors, poets or musicians. And given that all they need now is a click of the mouse nowadays to express their discontent if their objects of their affection fail to produce work worth of their appreciation, the verbal abuse to which they can potentially be subjected is more immediate. This act of appropriation is intimately linked to a sense of identification with the lives of those who're found almost permanently hogging the limelight. One extreme leads to stalking, whilst the other could well plunge a normal, law-abiding citizen into an unexpected depression, should he or she find out that their "star(s)" is/are in distress. Imaginary identification, plus ownership.

In my case, I remember how this sense of ownership manifested itself on one occasion. I'd read in a weekend magazine that one of my literary heroines, Maya Angelou, had just collaborated with Hallmark on a series of cards bearing her inspiring poetry. I recall feeling betrayed and even if I didn't go online to pour bile on the "people's poet" and her alleged "treason", inside me there was a little voice shouting out: "Sellout! Sellout!" But sell out to whom? Maya is Maya is Maya is Maya. The poems she contributed to Hallmark's regular middle-of-the-road output might not have had, in my humble opinion, the same quality of her masterpieces "Still I Rise" or "Phenomenal Woman" but they were still better than the usual crop Hallmark produces. That was, as I mentioned before, many years ago. The other day I read an interview with her in the paper where she was telling a journalist that she had just written a cookery book. She then went on to explain how some people thought it strange that she had decided to venture down a road that was so far from her main occupation, that is, to write poems. Presumably, and this is pure speculation, these people - amongst them, critics - considered cooking a less worthy activity than poetry. However, I remember thinking after I finished reading her interview that if there was one person in the world for whom the word "cooking" was created, that person was Maya Angelou.

Do some people idealise artists too much? I think they do, although not all the time. And in doing so, they're treading a fine line between being in awe of their favourite artisans and plundering their private lives in search for the minutest details in order to satiate their curiosity or to identify with them. Fortunately, somewhere in the middle of that equation there's a young chap, too touched by the grand occasion of seeing his favourite actress sitting on stage so close to him, who can't even manage to remain calm whilst asking his question. The good news is that, he at least represents the positive side of fandom.

And this is "see you later" from me until January. As I usually do at this time of the year, I go into hibernation for about three or four weeks. However, Sundays will not be empty. I have a little pressie for you, my dear readers and fellow bloggers because after all 'tis the season to be jolly. I will be posting each Sunday some of my favourite articles and essays from the last few years or so. These are pieces that have inspired me a great deal, mainly by journalists, specialists and writers whom I worship. Please, bear in mind that I haven't sought permission to publish these articles, so, if a newspaper or magazine editor asks me kindly to take them down, I will comply straight away. In the meantime, I wish you a merry and relaxing festive period and a Happy New Year!

Next Post: “From Here, There and Everywhere”, to be published on Sunday 18th December at 10am (GMT)