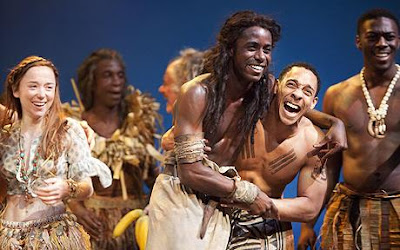 If, like me, you're a fan of Mark Ravenhill's fortnightly columns in The Guardian and were wondering what the acclaimed playwright's been up to, I advise you to make your way down to the National Theatre, located in London's popular South Bank. There, you will be able to enjoy the quadragenarian venue's latest family show, 'Nation'.

Based on the novel of the same name by Terry Pratchett and adapted for the stage by Mark Ravenhill, 'Nation' tells the story of Daphne and Mau, two children on the cusp of adolescence who meet in very eventful and extraordinary circumstances. Daphne sails off from Britain to see her father, when a gigantic tsunami wave overthrows the ship on which she is travelling. Suddenly she finds herself on what appears at first to be a deserted island in the South Pacific. Meanwhile, on the same island, local boy Mau is in the middle of his coming-of-age ritual when the same wave catches him unawares. The meeting and eventual interaction of these two beings become the main plot in both novel and play. For Daphne this means changing her posh ways and getting used to the natives' culture. For Mau, on the other hand, it signifies premature leadership; the wave has destroyed his country and the few survivors feel desperate and hopeless. Danger comes in the form of Cox, Daphne's former butler, who is now the chief of a rival tribe and treated like a god. The ex-servant, still traumatised by the death of his five-year-old son many years before, has focused his hatred on Daphne, whom he blames for many of the ills he has suffered. In reference to 'Nation' Terry Pratchett has said that it deals with 'a boy and a girl and a parrot, and about how people tend to be very similar to other people once you get past a few insignificant differences. At one point it was a book about how the Archbishop of Canterbury might have been a cannibal chief, if he had been born in another place at another time.'

Though I bought the book at the theatre, I have yet to read it so this review is mainly focused on the play. As a spectator, I found it to be teeming with several themes, subtly presented. For instance, the big wave is a reference to the tsunami wave that brought chaos and devastation to many countries in the Indian Ocean in 2004. Creation myths are analysed through the powerful and ubiquitous presence of Imo, the God of Mau's people. Colonialism is also examined through the relationship between Daphne (the name she adopts on the island) and Mau; and also between the rest of the shipwreck survivors and the island's inhabitants.

Above all, 'Nation' is a play that moves easily between humour and tragedy and does so with quality and panache. This is down, for the most part, to excellent performances and a superb mise en scène: a rotating stage that allows multiple settings, an ingenious use of new media, imaginative props (the vultures and the giant boar are spectacular) and live music. In the leading roles both Gary Carr (Mau) and Emily Taaffe(Daphne) stand out, even if sometimes they're both overshadowed by Jason Thorpe (Milton, the foul-mouthed parrot).

That this family show premiered last year, just before the annual Yuletide jamboree should be an indication that Christmas needn't be a time to switch your brain off. At the National they're already taking care of that.

Image taken from the telegraph.co.uk