There are two reasons why I love camping. One is the fact that we are communing with Mother Nature in almost perfect harmony. And we do this as a family. It’s great to see my children interacting with other kids, with adolescents and with adults in general. The other reason is the walks that are organised by the coordinators. At camp we are divided into rotas: some people do washing up, some others carry water, there are those who are in charge of cooking and others have the responsibility to coordinate the activities for the day and night. It is this last group that usually decides whether we go on a walk or not. And more often than not we do.

South West England has a superb and varied coastline. The path runs unspoilt for approximately 630 miles and walking along it is the best way to enjoy the wonderful wildlife and heritage this part of the UK has to offer.

One of the walks we undertook whilst camping led us around the Poole area. It was not a very difficult one; all you needed to do was to keep the sea to one side whilst looking for the acorn way-marks that guided visitors around. The variety of the Coastal Path guaranteed plenty of gentle stretches as well as dramatic headlands. Sometimes the going got strenuous and demanding due to the steep valleys we had to negotiate. The walk was circular, meaning that we all kicked off near the village of Worth Matravers, walked near St Adhelms Head and some high cliffs where we sat down to eat our lunch, visited a Norman chapel and wrapped up in the aforementioned village. Along the way we all felt exhilarated by the dazzling panorama encircling us as we rounded the headland. One of these amazing vistas was Portland island 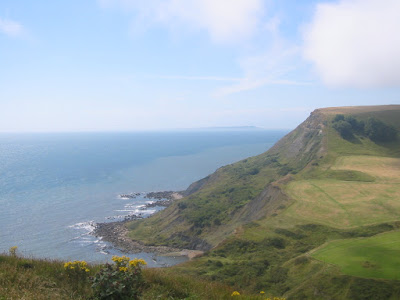 in the distance (after which the city in Oregon took its name, picture on the right). It was a view to behold, the way the island appeared to be enveloped in a nebulous mix of clouds and mist. Whilst eating our lunch, sitting on the ground and absorbing the breathtaking landscape in front of our eyes, a kestrel came into our field of vision and hovered a few feet away from us for a few seconds. According to a fellow who always travels with our group and lectures at Middlesex University on ecology and the environment, kestrels are the only birds of prey in the British Isles that hover. This one in particular, seemed to be putting on a show for us to enjoy. It stopped in mid-air for what seemed an eternity before diving headfirst to catch its prey (or so I thought at the time). The same lecturer told me also that this was the season when, if we went down to the beach, we would be able to catch reptiles basking in the sun in the sandy clearings. Another sighting would be that of common terns feeding offshore as well as tiger beetles cavorting on sandy areas and paths.

The weather was a good companion on this occasion. Sometimes, back in the camp, I wondered whether Mother Nature played tricks on us, mortal beings, whilst hidden in one of the nooks and crannies of this stunning coastline. The sunrise that morning had been almost an autumnal affair with pale flashes of light filtering through a wall of clouds that closed off the eastern horizon. Cunningly, the new day had withheld its purpose, betraying no hint of the temperature that lay cuddled up in its bosom. In the event, bar a few drops of rain, the walk was favoured by the sun and a strong sea breeze that forced us all to don our jumpers (some, like me, had to resort to a hooded one).

I recently read a post by Lena from the ‘Hija del Exilio’ blog where she explained the role that the sea had in her life. And I felt myself agreeing with her wholeheartedly. This element has always been an eternal presence in my life. I was born on an island surrounded by the Caribbean Sea and many a day (and night!) I spent sitting on the Malecón (seawall) watching the world go by, thinking, reflecting, feeling. On this occasion the boom of the waves crashing against the shore exerted a kind of hypnotic spell on me and I felt homesick. The sea wore a stark variety of blue hues, darker here, light grey there. There was no way a painter could come up with 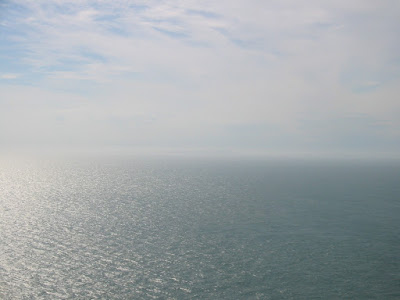 this array of colours using just one tonality: blue (picture on the left). This brought to mind Pablo Neruda's famous question: '¿Quiénes se pusieron contentos cuando nació el color azul?' ('Who was it shouted with joy when blue was born?')

On the way back to the car park where our minibuses were stationed, we passed by the St. Aldehelm’s Chapel. This was a building that stood on cliffs approximately 110m above sea level. It was dedicated to St Aldhelm, first Bishop of Sherborne. The general belief is that the chapel was originally a chantry, where a priest would celebrate mass for the safety of sailors, although it was apparently used for rest and prayer by kings, who often hunted in nearby Purbeck. On the day that we visited this historical construction (which is still used for Christian worship), we found a swallow that had decided to build its nest near the ceiling of the chapel. A link in the evolutionary chain seeking shelter in the house of God? Richard Dawkins would have a comment to make about that.

As we neared our minibuses we came across fields of barley that looked like uniform armies of gold (pictures below). I have no idea why but at the time I felt like playing hide and seek in them. 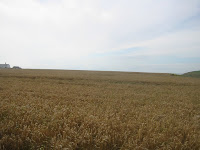 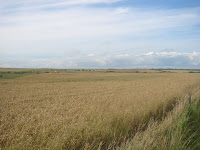 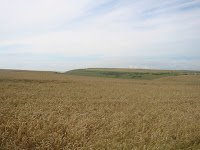 With its heathlands, cliffs, wildlife, coastal paths, history and heritage the visitor to the South West of England will always be spoiled for choice. I know we were.