Claude Monet, one of the pioneers of impressionism, was said to have been struck by London’s ever-changing weather when he alighted in the British capital in 1870. He was especially attracted to the metropolis’ combination of fog and light. On subsequent trips he managed to translate these two elements into a series of paintings of London’s bridges, the Houses of Parliament and the river Thames.

One of the more famous ones, The Thames Below Westminster, has become the go-to image to show Monet’s fascination with London. Shrouded in mist, the Houses of Parliament and Westminster Bridge emerge in the distance as a ghostly vision, one that contrasts heavily with the more colourful and dynamic foreground.

Living across the seat of British democracy gave Monet a unique insight into what London in the 19th century was like. Traffic on Westminster Bridge at the time, both pedestrian and carriage-led, must have been heavy. After all, one of the reasons to build the bridge was to serve as a link between the expanding West End and fast-growing south London. Up to then, commuters and visitors were forced to use alternative routes, such as the Strand and New Oxford Street. Westminster Bridge, upon opening on 18th November 1750, elicited glowing praise like this comment, from The Gentleman’s Magazine: a very great ornament to our metropolis, and will be looked on with pleasure or envy by all foreigners.” Truer words have never been written. On any given day, nowadays, Westminster Bridge is always full of families, tourists, or just politicians taking a break from parliamentary duties.

It was on this bridge, sadly, that Kent-born, 52-year-old Khalid Masood (né Adrian Ajao), decided to carry out his heinous terrorist attack on Wednesday 22nd March of this year. He drove a car into pedestrians, killing three, two instantly and one later on in hospital. Once he crashed his vehicle outside parliament, he tried to enter the building armed with two knives stabbing fatally a police officer in the process.

Monet took inspiration from London’s foggy weather to create his masterpieces. Terrorists’ main intention – whether the Daesh-inspired or the white supremacist type – is to create a mist-like, blurred, hazy vision of unimaginable panic. Perpetrators like Khalid know that they have not got a chance in hell to turn their hate-filled philosophy into a viable political alternative. Hence, their “amateur”, but devastating, modus operandi.

The entire area around Westminster Bridge has changed a great deal since Monet walked its streets more than a century ago. It is no longer just a place to go through in order to get to south London, but an almost essential photo-op stop (the mud-coloured Thames offers a fabulous background) before purchasing a souvenir at one of the stalls nearby. Westminster Bridge and its surroundings are often so packed with pedestrians and cyclists (the East-West cycle superhighway takes in part of the Embankment) that it makes sense to use the road instead, despite the obvious dangers.

In trying to mow down those he saw as infidels, Khaled might have ended up killing fellow Muslims. The paradox of this new kind of terrorism the West has faced for the last sixteen years is that it is nothing new in Muslim nations where the number of victims murdered by extremists is far higher. 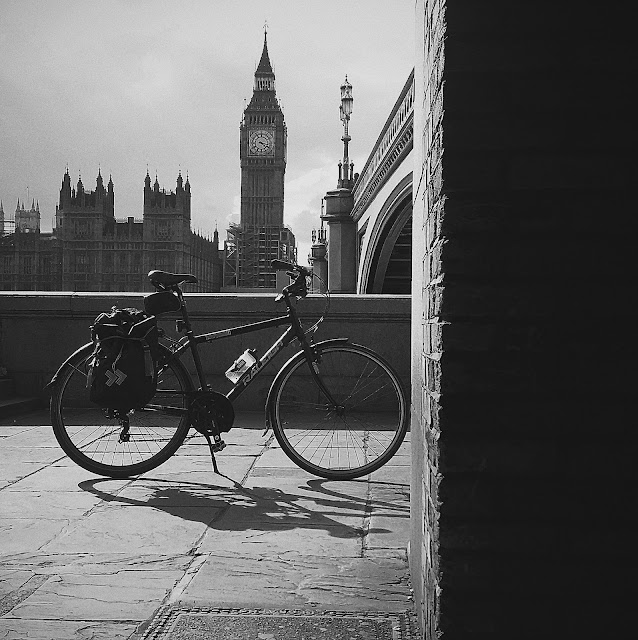 If Khaled had ventured “sarf” of the river and driven down York Road, he would have come across a couple of Italian restaurants and two or three Indian-themed ones. At any time of the day or night, these establishments are crowded with punters. Punters who come from all corners of the globe. This is what terrorists are up against. It is not just a way of life that refuses to be defeated, but also a two-finger-up attitude that whatever flaws London has (and there are many), we, Londoners from here, there and everywhere, love our city the way it is. Warts (plenty) and all.

Of course, the sheer volume of visitors London attracts (9.98m visits from January to June according to the VisitBritain website) makes the city an obvious target for a terrorist attack. This is the reason why most of us, city-dwellers, have adopted a mindset that has more in common with the famous “Keep Calm and Carry On” World War II slogan than with the panic terrorists are intent on spreading.

It is interesting, albeit not surprising, that Monet, who was inspired by London’s dreamy, hazy, misty autumn weather, is getting his own exhibition at the National Gallery next year. His art has defied the passing of time. On the other hand, we have a terror-spreading individual whose actions, whilst costing the lives of some, were repudiated instantly. Nobody will remember Adrian Ajao’s name in five years’ time. In attempting to paint our lives in fog-coloured textures, Khalid became what the Houses of Parliament emerged as in Monet’s The Thames Below Westminster: a ghostly and fast-disappearing vision.