And tonight we finish the debate about feminism that we started last Tuesday 27th April. To read the first part, including the five bloggers' biographies, click here. 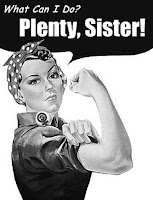 4- It looks like womanhood - whatever that means, and please, contribute your own thoughts to the definition of that word - and feminism are mutual friends and foes, depending on the context and the individual. What's your take on it?

Deborah: As feminism celebrated being female, it had a distinct tendency to decry femininity. While it would be simplistic to view femininity as a ‘one size fits all’ concept, so is it incorrect to assume that the level of importance placed by an individual woman on ‘feminine’ pursuits, interests or perspectives is in inverse proportion to her belief in, or commitment to the basic tenets of feminism. The extremes of the early movement have been tempered over the years, but the debate over whether a woman can be ‘not feminine enough’ or ‘too feminine’, still goes on. I can’t speak for women in general, but my experience of the difficulty making choices that allowed me to be flexible and true to myself without appearing to betray what I expected of myself as a feminist was shared by a number of female friends of my age. An ideology that suggested compromise with men was essentially subjugation and that what could be termed classic feminine urges to nourish and support were evidence of our lack of self-worth (to name but two examples), contributed negatively to the already complex dance of the sexes. On the other hand, influenced by women who were competent and confident, whose perspectives had value, whose goals were humanistic, and who committed themselves to a better world for women made me proud to be female, more confident to be who I was without measuring myself against the almost wholly male-centered standards of pre-feminist society. It took a few decades for me to realize that feminism and femininity could happily co-exist, and the irony of that is that it took a man to convince me of it.

Hema: What is womanhood? There is no one universal definition for it, because it means different things to different women. In fact, I would take it a step further and say that the word means different things to the same woman in different contexts. Womanhood (free of all cultural connotations attached to it), for me, is basically defined by the sum of all the principles a woman holds dear. I do not agree that depending upon the woman in question and the context in which she finds herself, feminism and womanhood are rivals. If a woman’s view of feminism (because even this word has many layers to it) is in-line with the principles she upholds, then she could be a feminist and still be true to her definition of womanhood.We hear every day about women (in their own confessions) who are forced to compromise on their integrity, among other things, to achieve success. It is my belief that in cases such as this (where the woman has the luxury of thinking about success as opposed to survival), there has been a deviation between the woman’s ideals and her definition of success, or there wouldn’t even be a question of a compromise. And her choice that led to the compromise is a personal one, and cannot be blamed on feminism.

Miriam Levine: “Womanhood” refers to the adult stage of life after girlhood. For me, the word “womanhood,” connotes maturity, strength, and wisdom, qualities hardly in conflict with feminism.

T. Allen Mercado: Womanhood? Laughs. "Isms" really complicate things, don't they? Speaking for myself, my womanhood and feminism are mutual friends. One of the ways I broach/defend the topic when it arises, which is often, is by reminding my friends/colleagues/etc. that feminism is about equality and choice. Therefore, there are and will always be facets of the movement (I prefer lifestyle) I opt against, because I have the freedom to do so.

Catherine: I see ‘womanhood’ in two different ways. It is the biological extras that come with being female – primarily being a mother and thus a caregiver, which for many women is a privilege, and something to strive towards. Other women see child-bearing as a hindrance to an independent life, cutting short or diminishing any potential career, but of course, bearing children is not a prerequisite to womanhood – rather womanhood is a prerequisite to having children, and women have the choice not to have children if they don’t want them (I cannot comment on any pressure that women who don’t want children may face, as I have never encountered that myself, though I am sure it exists).
The other side of womanhood does limit women, to the point where I question how much of me is me, and how much of me is ‘woman’. This womanhood is what we see in the media, in advertising, in all women around us everyday; women feed this image of womanhood, and this is what fuels the type of repression Charlotte Raven talks about in her article. The image of the pretty, feminine woman in the frilly apron is exactly the same in its nature as the heartless career bitch in a suit, and both are as stilting to women’s progress as each other.

5- In the same way that market forces created the metrosexual man at the end of the 90s and beginning of the 2000s (clean-shaved chins, a more effeminate look and Brazilian waxes, although I would definitely stop at the latter), the same consumerist, publicity machine gave birth to pole-dancing, guilt-free promiscuity and alcohol-fuelled hen nights. Female liberation or misogynous Neo-colonisation?

Deborah: Neither. It’s a posture, depicting sex as currency and masquerading as the seeking of some basic truth. It’s as limiting as any of the pre-feminist ideals and expectations of women. Sexuality is a complex, nuanced, aspect of being human and highly individual, as any sex therapist or will tell you. Any media- or marketing- based perspective that reduces sex to mere sensation or sensationalism or appearance should be regarded with the scepticism it deserves. We lose—all of us—when we give in to the suggestion that there is an ideal expression of sexuality, particularly when it is flavoured by self-interest and personal power.

Hema: Can we blame this new phenomenon entirely on consumerism?This is definitely not female liberation. If it is, then it is implied that all those (majority, I would like to point out) women who refuse to embrace this so-called trend are: subjugated, down-trodden, and uncouth. Also, I wouldn’t go so far as to call it colonization, because that would imply that the larger chunk of today’s women think that way, which is untrue. If anything, this tendency is as much a personal choice, on a case by case basis, as anything else. And why should it be called misogynous, when women are the ones facilitating this shift, to the most extent, by choosing such a lifestyle? I blame it on a combination of: excess of love for themselves, a skewed definition of success, and the fashionable “I’m worth it” attitude going overboard.

Miriam Levine: Exotic dancing, strip tease, belly dancing existed long before the market forces of the 90s. Remember Salome. Most men like this visual stimulation. However, pole dancing, etc. demeans women: they become brainless objects. I’d be interested in what these women have to say about their work. I once heard a talk by a showgirl in Las Vegas. She spoke as she gave a demonstration of how she put on her make-up. She was articulate and gracious—nothing like the pole dancers in The Sopranos. How much promiscuity actually exists? Cheers for women dining and drinking together. What’s the matter with hens? They lay delicious eggs. I prefer free-range, so let’s free them from cages. Keep in mind the long tradition of poker playing and bowling nights-out for men. Think of private men’s clubs! Come on!

T. Allen Mercado: I'm compelled to go with the latter, and I'm not lumping all participants under that clause, but somewhere along the way-even the best intentions at reclaiming, expressing and/or defining our sexuality went awry. Does it surprise me? Not at all. Historically this has been the Achilles' heel of most "isms". I certainly think a series of one-ups on the generations' previous led to the decline we see now, much like a game of Jenga.

Catherine: This aspect of feminism has the potential to be argued forever by two women standing at different angles. The way I see it, women who express their sexuality on their sleeves are fuelling sexual repression amongst all women. However liberating or enjoyable they may find pole-dancing, they are putting a beacon over all women as sex objects and performing animals. I’m certainly not saying that women who wear miniskirts are asking to be raped, but there is a reason that one in three women is sexually assaulted in her lifetime, and I don’t think that is only down to men. Men are presented with the image of sexually ‘liberated’ women every day, putting themselves out on the table to be ogled at, twisting their bodies around poles with such pleasure, wearing tacky penis-shaped headbands and feather boas as they stumble out of bars. This is not liberation that we are seeing; this is pure sexual repression, desperately calling out ‘look at me’ as the human inside the promiscuous outfit hides behind the image of society’s sex godess. Surely, to be liberated is to say no to this misogynous idea of sexualised women?

Next Post: 'Sunday Morning: Coffee, Reflections and Music', to be published on Sunday 2nd May at 10:00am (GMT)
Posted by A Cuban In London at 23:59